Drawing the same character over and over again consistently can be really hard.

And the worst part is that sometimes you can’t even understand what’s wrong with the drawing!

So let’s get you drawing characters consistently like a pro today.

The best way to draw your character consistently is to have templates for the character turnaround, the expressions, and practice drawing them as much as possible.

So let’s get into specifics on how to do each part!
I’ve included the video below where I go over how to draw your character consistently as well in case you prefer video:

Drawing a turnaround of your character is quite complex.

However, doing it will not only help you know your character’s design better, but it’s a great reference to use later on.

But what is a Character Turnaround? It’s a visual reference of your character seen from different angles.

Having a turnaround template of each of your characters will allow you to reference every specific detail about them anytime you draw them.

This can be useful not only to yourself but if someone else is working with you on the same project!

A turnaround template is usually made out of 4 different views of your character.

It can be more or less. Depends on what you’re using your character for.

For example, if you’re using your characters for animation, then the best is to go for 8 views.

A total 360-degree view of the character.

If you’re not using your character for very complex projects or work, you can also just go with only 3 views: front, side, back.

But, it’s recommendable to do a 4 view turnaround of your character.

This includes a front view, side, ¾, and back view!

This way you have a more complete reference and chances are you’ll draw your character in ¾ quite a lot since it’s a very common pose.

Also, drawing characters in ¾ view can always be a bit more difficult than the others, so this is a great chance to practice!

When you do this turnaround, don’t forget to add any guidelines you might need. So every single view has the same measurements and proportions.

Not only that, but draw all your character details.

From beauty marks or scars on the skin to accessories, patterns, buttons, or anything that is part of their design.

The idea is that you have a template with every single visual information of your character, so don’t leave anything out.

It’s also a good idea to add a color palette to this turnaround, along with the codes for each color.

This way, you’re sure you won’t miss anything when drawing them on your projects or illustrations.

Also, if you have more than one outfit for your character, consider doing turnarounds for these as well!

Change is perfectly normal, so don’t worry if you start adding new details or new ways to draw them over the years.

It’s a sign of artist growth, so embrace it!

You can come up with new details and styles for your character and still be consistent.

Our ideas change, or we might find some things on your character to be impractical, so it’s good to add some modifications from time to time.

Even comic book artists will show that change.

A lot of times, the way they drew their characters the first time is very different from more recent drawings!

Embrace these changes, it will actually be really good for you and your art.

After creating a turnaround for your character, it’s time for another very handy reference sheet: expressions!

You can draw as many expressions as you want, but it’s good to at least have the main ones: Happy, Sad, Angry, Crying, Laughing, Nervous, and so on.

Imagine how your character would react to a situation and draw them on the sheet!

This is a great exercise because you’ll end up with some references to use later on when you need to draw your character in different situations.

But more than that, you’re also practicing drawing your character!

It’s a 2 in 1, you’re getting more consistent with your character drawings AND creating future references.

Not doing an expression sheet, and leaving your character looking very bland is one of the biggest and most common character design mistakes (I list a few more here!)

Actually, there’s even one more advantage to this: you’re practicing your expressions as well!

Either if you’re creating a comic with your characters or if you just want to draw illustrations with them, it’s good to be able to draw expressions.

It will always bring extra emotion to your drawings.

And the more you draw them, the better you’ll get at conveying them!

Here’s a big list of expressions that you could have in your expression sheet:

These are just some ideas, and you can add your own as well!

Draw Your Character Often (With This Neat Exercise)

You knew this was coming. Practicing is a great way to draw your characters more consistently!

By purely drawing them over and over again, you’ll be able to draw your character consistently and keep them on model.

It’s only natural: the more you draw them, the more you’ll memorize them until you don’t even need a reference anymore!

It’s also by practicing and repetition that you’ll learn what sticks and what doesn’t work on their design anymore.

We like to add all these details to our characters, to make them feel unique.

But sometimes it can be too much.

Not only that, but if you’re drawing them frequently, too many details might be more of a struggle.

And you only realize this by drawing your character…a lot!

Even if you want your character to be unique, try to do it in a way that is both appealing but simple and easy to draw.

This way you won’t waste time on unnecessary details!

But before you leave, here’s a really fun exercise that I use to help me draw my characters more often:

Create stories for your characters!

That’s it. It will really help you draw your character over and over again.

And they don’t have to be HUGE stories or anything like that.

You don’t need to go and create a whole graphic novel on them.

Just think to yourself what would be an interesting situation for your character.

Try to imagine them in different settings and actions. It can be very simple!

Maybe it’s a very warm day out and you want to draw them by the pool. Or taking a stroll by the forest with a friend.

These stories will help you think of interesting situations and poses which you can use to practice drawing your characters!

And this way, you can also use those turnaround templates and expression sheets as reference.

In my opinion, it’s the perfect way to motivate yourself into practicing your character’s designs.

You’ll get better at drawing, will learn new things about yourself and your character as well as feel more attached to them!

What drawing software should I use to do these templates? Use any drawing software that you’re used to. I recommend Clip Studio Paint (paid) or Krita (free). But you can read this post where we go over 16 Free Drawing Software or even just do it on pencil and paper!

I’m just starting to draw, where do I start? If you’re just starting out, I recommend you check out our post on the Best Cartoon Drawing Tips to get started, or just dive into one of my beginner-friendly drawing courses! 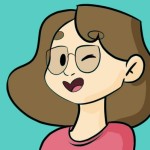